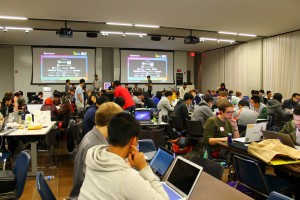 Hackathons are becoming incredibly popular all across the world. One of my fellow hackers from Princeton recently went as far as Abu Dabhi to attend NYU’s hackathon. Major League Hacking was formed last year to track and support the organization and participation of student-led hackathons. Two years ago, I organized HackRice — our first hackathon at Rice University with the help of the CS Club. We had about 50 participants at this hackathon with 12 demos and 2 professors as judges. The hackathon was quite successful and we got an overall positive feedback.

Instead of giving direct advice on how to organize a hackathon, below is our story of organizing HackRice 2014. I hope you’ll find tidbits of implicit advice and learn from the mistakes we made.